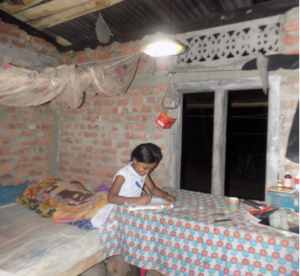 A SMALL INITIATIVE CAN BRING A BIG CHANGE IN LIFE

This case study takes a glimpse into a small village known as Jakua in Chhapra, Bihar. The main industry in the village is agriculture, with various crops cultivated through the seasons. In this village lives a Saija client named Seema Devi.

A typical day in the Jakua village starts at 5 in the morning during the summer. Men go out to the fields for work while the women begin their daily chores. Seema Devi’s husband works in the paddy fields of their landlord. The family’s house has a storage area attached to the house to keep crops to be processed. Seema and her husband have three children and her husband was the primary breadwinner, but times were tough as crops in the village were frequently stolen. She tried to earn extra income by making pickles to sell, but dreamed of earning more money. Her dream was to own cattle which would provide her family with milk and allow her to make milk products to sell.

She did not expect this dream to be realized in Jakua, until the spring of year 2016 when a friend told her about Saija. She realized that with a loan from Saija she would be able to buy cattle. Seema formed a group with her neighbors and took loan from Saija. The day Seema saw her future brighten was a memorable one, and Seema worked fast through her morning chores to get to the Chhapra branch by midday to receive the loan. Seema remembers the clock ticking 11 am … she and fourteen other women walked inside the Chhapra branch to receive their loans and they all emerged with big smiles on their faces.

Two days later Seema bought her first cow. She milks it every day, and now sells milk to nearby homes.

One day, Seema’s loan officer Pankaj announced another product Saija offered with financing – a solar lamp – he explained the benefits of solar to the women group members. Many members of the group were eager to buy one in order to have light after dark, since the village experienced frequent, prolonged power cuts.

Seema used an energy loan from Saija to purchase a solar lamp and immediately saw benefits from it: her children could study after dark, they had reliable lighting even during storms and power cuts during the windy monsoon season. Perhaps the greatest benefit for Seema and her neighbors was that having solar lights on at night kept the village safe from robbers.

Lets get in touch

Give us a call or fill in the form below and we will contact you. We endeavor to answer all inquiries within 24 hours on business days.
1800 419 9035
info@saija.in